Why I Love Freecycle

Freecycle, or Fullcircles as my local one is called (it branched out), is awesome. You can give away your old stuff to people who will actually use it, instead of donating it to Value Village where it might languish for months before being shipped to Africa, or destroyed. There are all sorts of things offered up, sometimes broken, but it's free and if you can fix or use it, who cares, right?
I first joined Freecycle because I wanted a 50's dinette set. I knew it would be a miracle if one ever showed up.. but not a month later, one did!! AND it was yellow, just what I wanted! I think it was the universe sending me messages again. Anyways, though it took awhile for me to get the stupid thing, I did. And then I started getting more stuff.. and more... but it's all good. I feel like I am pretty lucky, most of the things I reply to are gifted to me. I think it's because I am polite but humourous in my messages to people, and I do truely only ask for things I will use. I also give alot of stuff away so I think it is true, you get what you give.
Anyways, I wanted to show you guys some of the amazing things I have been gifted from Freecycle. These are just the decor items, lord knows I have a tonne of stuff in my cupboards, or little things that would be useless to tell you about, so here goes!

The Dinette
As I said, this was my whole reason for joining. The girl had bought it at an auction but had found a more size-suitable table for her new house. The chrome on the legs of both the table and chairs is totally rusty, and two of the chairs have little rips, but really those things aren't the first thing you notice. And it will tide me over until I find a real fancy (and hopefully affordable!) new one. 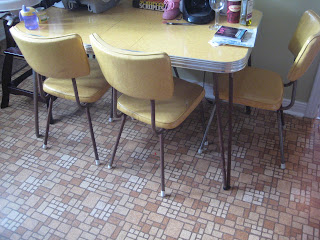 The Green Chair
We had an old green chair that was sort of wooly, and Cletus tore it to shreds. So we got this one from a nice family not far from our house. It had been their aunt's chair. I wasn't sure about it at first, but Cletus doesn't seem to like it so that makes it good in my books! 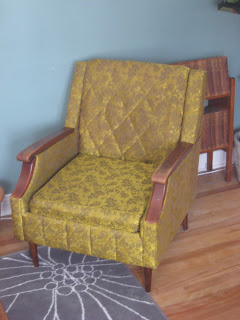 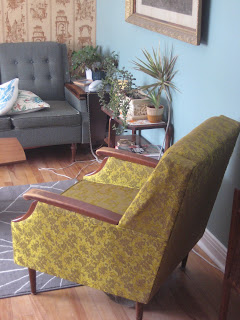 Encyclopedia Britannica 1910
This set, including the stand (original? Possibly) is the 11th Edition, printed in 1911. It is pretty hilarious to read, because so many things haven't happened yet. There are lots of pages to unfold with crazy pictures and maps. The pages are that really thin paper, like an old Bible. The spines are well worn but the covers are in good shape. 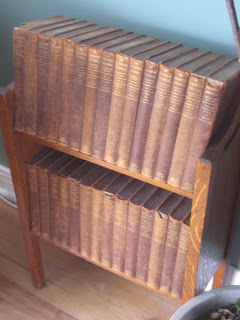 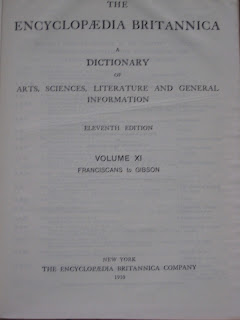 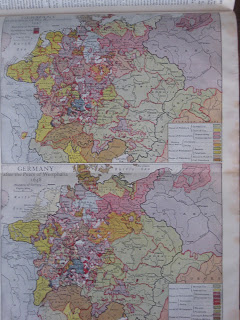 Cristobal
A nice lady in Westboro gave away her stuffed hawk, and I was the lucky recipient! She said she had had alot of interest in him. I think my story about Petey won her over :) Anyways, the hawk has a back story I thought was really interesting: Years ago, the lady was travelling through Europe, and she stopped to see a friend in Spain. The friend gave her this hawk, as a present, but she was not done her travels so then had to lug it around with her! She had a hard time getting it back into Canada because of what it is, but she did, and now he lives on my dining room hutch. He is going to get a nicer home once we get the shelves for the den finished. Anyways I like him alot. 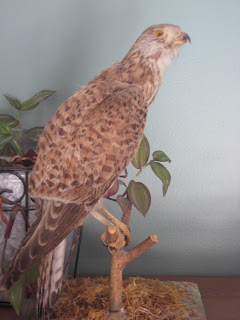 The Bookcase in the Den

I picked this up around Christmastime from a guy who was giving away some sweet stuff. It is exactly the height and style we were looking for, for the den. All of the wood in that room is teak or that shade so it suits perfectly. There are some burned spots on the top (or maybe it's just stained, it's hard to tell) but it doesn't matter to me! And it's going to be covered up with books at some point anyways. 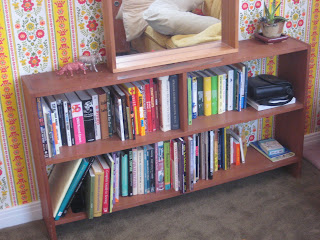 Big Metal Desk
I wanted a big desk or table for sewing, and it was used for that purpose sporadically, but now it has been taken over by Greg. Sorry about the mess in the picture, but Greg is trying to revive a plant in his vintage chrome slate-bottom tank. We also use it as a potting table for our million houseplants. Therefore you could say it is very versatile and well loved. I like the Formica top on it... I think I might use a pattern similar in my kitchen. I believe these desks were used by the Government back in the 60's and 70's, and the thing is solid metal. It weighs a frigging tonne.

Eames Era Chair
No, it is not an Eames. Those are too pricey for this thrifty gal! The maker of this was John Doerner and I am not sure, through my research, if his company made the whole chair or just the metal part on the bottom. Apparently there was some lawsuit involving sale of a company and then they didn't abide by the rules set out in the contract.. anyways it is a fakes Eames that I got from a woman who was cleaning out her father's house. I didn't really want it because of the colour but Greg told me I was crazy to let it go.. so I got it. As I went to pick it up there was another man picking something up and you could tell he was super jealous. :) 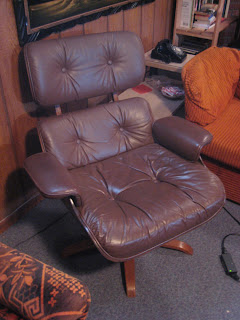 The Little White Chair
I got this chair from the same house as Cristobal, but like a year apart. Freecyclers really just keep on giving! Anyways, I was having 11 people over for Christmas dinner and I needed another chair, when this one popped up. I have never seen a chair who had extra spindles on the back crossing over like that, I thought it was really neat and the paint is all shabby and cream-coloured.. anyways now it and Cristobal are reunited and it feels so good. 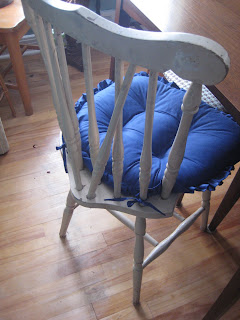 Else's Change Table
This was a wooden dresser in not the greatest shape. It was maple coloured, and is solid wood not that MDF crap you buy nowadays. Anyways we repainted it and put new hardware on, in a simple rough brass finish and ta-da! Else has a nice change table! The top has a ledge around it so it keeps her change pad from falling off. It has been very useful for me because it is high up and all her clothes are right there for me to dress Else in each day. This was a big score for us! 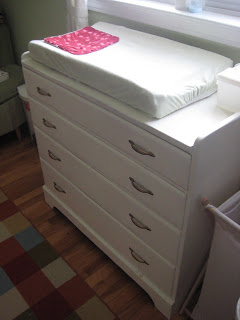 The Hutch
I didn't actually get this off of Freecycle but it was free and I saved it from the trash so I think that counts!! My friend Jen J's sister has an awesome design blog you've probably seen, Desire To Inspire, and this used to belong to her. It was in their parent's basement and she was going to put it to the curb when Jen told me about it and if I wanted it. Heck yes I wanted it!!! So we stuffed it in the back of the Subaru, which was no easy feat, and lugged it up to our apartment. It had a really great spot in the apartment but unfortunately we haven't found the best place for it in our house. It is currently in the back corner of the basement acting as a bar. I would love to bring it back up to the kitchen, maybe when we redo it there will be a spot! I think my Pyrex would suit it just perfectly :)

Thus concludes my Ode To Freecycle. You should join up cause there's so much stuff to be had!! Here is the link to find one near you, or check out Fullcircles here.

* I should clarify that I mention both of the organizations because they have both been good to me, but I am currently on the Fullcircles list.
Posted by lilynymph at 10:45 AM